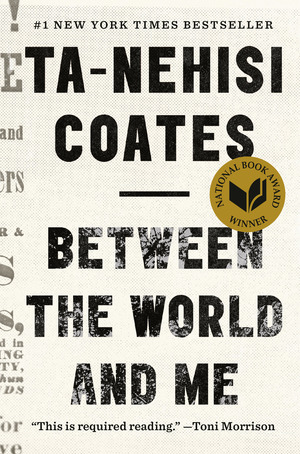 Between the World and Me

1. Between the World and Me has been called a book about race, but the author argues that race itself is a flawed, if not useless, concept—it is, if anything, nothing more than a pretext for racism. Early in the book he writes, “Race, is the child of racism, not the father.”  The idea of race has been so important in the history of America and in the self-identification of its people—and racial designations have literally marked the difference between life and death in some instances.  How does discrediting the idea of race as an immutable, unchangeable fact change the way we look at our history? Ourselves?

2. Fear is palpably described in the book’s opening section and shapes much of Coates’s sense of himself and the world. “When I was your age,” Coates writes to his son, “the only people I knew were black, and all of them were powerfully, adamantly, dangerously afraid.” How did this far inform and distort Coates’s life and way of looking at the world?  Is this kind of fear inevitable?  Can you relate to his experience? Why or why not?

3. The book—in the tradition of classic texts like Ranier Maria Rilke’s Letters to a Young Poet  to James Baldwin’s The Fire Next Time—is written in the form of a letter. Why do you think Coates chose this literary device?  Did the intimacy of an address from a father to his son make you feel closer to the material or kept at a distance?

4. One can read Between the World and Me in many different ways. It may be seen as an exploration of the African American experience, the black American male experience, the experience of growing up in urban America; it can be read as a book about raising a child or being one. Which way of reading resonates most with you?

5. Coates repeatedly invokes the sanctity of the black “body” and describes the effects of racism in vivid, physical terms. He writes: “And so enslavement must be casual wrath and random manglings, the gashing of heads and brains blown out over the river as the body seeks to escape…There is no uplifting way to say this. I have no praise anthems, nor old Negro spirituals. The spirit and soul are the body and brain, which are destructive—that is precisely why they are so precious. And the soul did not escape. The spirit did not steal away on gospel wings.” Coates’s atheistic assertion that the soul and mind are not separate from the physical body is in conflict with the religious faith that has been so crucial to many African Americans. How does this belief affect his outlook on racial progress?

6. Coates is adamant that he is a writer, not an activist, but critics have argued that, given his expansive following and prominent position, he should be offering more solutions and trying harder to affect real change in American race relations. Do you think he holds any sort of responsibility to do so? Why or why not?

7. Some critics have argued that Between the World and Me lacks adequate representation of black women’s experiences. In her otherwise positive Los Angeles Times review, Rebecca Carroll writes: “What is less fine is the near-complete absence of black women throughout the book.” Do you think that the experience of women is erased in this book?  Do you think Coates had an obligation to include more stories of black women in the text?

8. While much of the book concerns fear and the haunting effects of violence, it also has moments where Coates explores moments of joy and his blossoming understanding of the meaning of love. What notions of hard-won joy and love does the book explore?  How do these episodes function in counterpoint to the book’s darker passages?

9. Do you think Between the World and Me leaves us with hope for race relations in America? Why or why not?  Do you think “hope” was what Coates was trying to convey to readers? If not, what are you left with at the end of the book?  If so, hope in what?